What is Simcoe Reads?

Seven Simcoe County libraries (Barrie, Bradford West Gwillimbury, Essa, Innisfil, Midland, New Tecumseth, and Ramara) are squaring off for a cover-to-cover competition! Based on Canada Reads, each library will select a Canadian book and a local celebrity champion. Read all seven books over the summer and pick your favourite; watch the Champion live debate in September and vote!   Join us for Author Talks, Open Book Clubs and other tie-in programs all summer long as we prepare for the grand finale debate!   Live Debate TBD September 2021!

From the award-winning author Michael Christie comes a propulsive, multigenerational family story, in which the unexpected legacies of a remote island off the coast of British Columbia will link the fates of five people over a hundred years.  An ingenious nested-ring, multigenerational epic, set against the devastation of the natural world.

MICHAEL CHRISTIE is the author of the novel If I Fall, If I Die, which was longlisted for the Scotiabank Giller Prize, the Kirkus Prize, was selected as a New York Times Editors’ Choice Pick, and was on numerous best-of 2015 lists. His linked collection of stories, The Beggar’s Garden, was longlisted for the Scotiabank Giller Prize, shortlisted for the Writers’ Trust Prize for Fiction, and won the Vancouver Book Award. His essays and book reviews have appeared in the New York Times, the Washington Post, and the Globe & Mail.

Greenwood, his most recent novel, was longlisted for the Scotiabank Giller Prize. Rights have been sold in seven countries.

A former carpenter and homeless shelter worker, he divides his time between Victoria, British Columbia, and Galiano Island, where he lives with his wife and two sons in a timber frame house that he built himself.

We are thrilled to announce NTPL’s Simcoe Reads selection: Greenwood, by
Michael Christie.  A propulsive, multigenerational family story, in which the
unexpected legacies of a remote island off the coast of British Columbia will link
the fates of five people over a hundred years. An ingenious nested-ring epic set
against the devastation of the natural world.

A former journalist and magazine editor, Judy Penz Sheluk is the author of the bestselling Marketville Mystery and Glass Dolphin Mystery series. Her short crime fiction appears in several collections, including The Best Laid Plans, Heartbreaks & Half-truths and Moonlight & Misadventure, which she also edited. Judy is a member of Sisters in Crime, International Thriller Writers, the Short Mystery Fiction Society, and Crime Writers of Canada, where she serves as Chair on the Board of Directors. She splits her time between Alliston and Goulais River, Ontario.

A Mind Spread Out on the Ground by Alicia Elliott

In an urgent and visceral work that asks essential questions about the treatment of Native people in North America while drawing on intimate details of her own life and experience with intergenerational trauma, Alicia Elliott offers indispensable insight into the ongoing legacy of colonialism.

ALICIA ELLIOTT  is a Tuscarora writer from Six Nations of the Grand River. Her writing has been published by The Malahat Review, Room, Grain, CBC, The Globe and Mail, and Maclean’s, among others. She is currently creative nonfiction editor at The Fiddlehead, associate nonfiction editor at Little Fiction | Big Truths, and a consulting editor with The New Quarterly. Her essay A Mind Spread Out on the Ground won Gold at the National Magazine Awards in 2017. Elliott lives in Brantford, Ontario, with her husband and child.

A Mind Spread Out on the Ground

Carolina Belmare’s passions include helping women with hectic lifestyles match their body to who they are, and what they’re capable of. She loves her blended family and her floofy cat named Churro. Carolina is an avid reader, an author, a speaker, an educator, and an entrepreneur.

Ayesha at Last by Uzma Jalaluddin

Ayesha Shamsi has a lot going on. Her dreams of being a poet have been set aside for a teaching job so she can pay off her debts to her wealthy uncle. She lives with her boisterous Muslim family and is always being reminded that her flighty younger cousin, Hafsa, is close to rejecting her one hundredth marriage proposal. Though Ayesha is lonely, she doesn’t want an arranged marriage. Then she meets Khalid, who is just as smart and handsome as he is conservative and judgmental. She is irritatingly attracted to someone who looks down on her choices and who dresses like he belongs in the seventh century.

When a surprise engagement is announced between Khalid and Hafsa, Ayesha is torn between how she feels about the straightforward Khalid and the unsettling new gossip she hears about his family. Looking into the rumors, she finds she has to deal with not only what she discovers about Khalid, but also the truth she realizes about herself

Emily Dahlgren is a 15 year old Bradford West Gwillimbury resident who likes to stay busy! She runs her own business, The Munchies’ Concession Stand, and co-runs ‘A Bradford Christmas,’ the foundation she started with her sister. When she is not serving the community, Emily expresses her creativity by video editing, and writing, and relaxing with a great book.

Set in an imagined world in which the most vulnerable are forced to buy their freedom by working off their debt to society, Gutter Child uncovers a nation divided into the privileged Mainland and the policed Gutter. 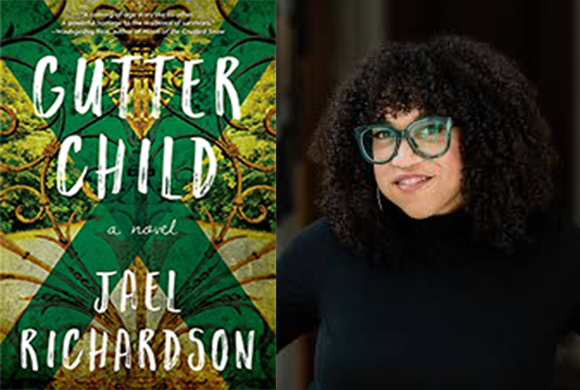 Grace Baker is a grade 10 student at Nottawasaga Pines Secondary School. She has always loved reading but her passion has grown immensely during quarantine while reading in her spare time. Grace loves musical theatre, being outdoors and is excited to be a part of Simcoe Reads. She is eager to represent her community, discover new authors and challenge herself in this new experience.

The Company We Keep by Frances Itani

It’s been three years since Hazzley’s husband died but she is still struggling to cope. After some persuasion from her longtime friend, Hazzley decides to start a conversation group. The group quickly grows to include six strangers who meet in the back room of Cassie’s cafe weekly, each with their own unique stories to tell. The strangers find comfort and good company in this touching yet funny novel.

The Company We Keep

Anne moved to Innisfil eight years ago, following her retirement as a Senior Executive with an International Financial Services Company. Having been an active volunteer within the Toronto community, Anne immediately began looking for new volunteer opportunities and is currently the Chair of the Innisfil ideaLAB & Library Board, the President of the Innisfil Rotary Club, Treasurer of the Innisfil Community Foundation and a member of 100 Women Who Care, South Simcoe. Since early childhood, Anne has been an avid reader and Enid Blyton was her favourite author as a child. Anne believes that if you love reading, you will never be bored or lonely, and she is delighted to have passed on her love of reading to her two daughters and five grandchildren.

The Centaur’s Wife by Amanda Leduc

Amanda Leduc’s The Centaur’s Wife is a magic realist novel that imagines what it means for us, and our world, to be broken, changed, and grieving…and to be resilient, sufficient, and bound together.

Cady McLaughlin is a farmer, designer, and mother from Lafontaine, Ontario. She grows flowers and works on the family farm looking after horses, hens, and hay. Cady is passionate about community building and environmental sustainability. With degrees in museum studies and history, Cady gravitates towards stories that envelop the reader in a different world, while empowering them to make discoveries about their own.

Indians on Vacation by Thomas King

Inspired by a handful of postcards sent nearly a hundred years ago, Bird and Mimi attempt to trace long-lost uncle Leroy and the family medicine bundle he took with him to Europe.

After forty years of various occupations including office management, real estate brokerage, and community volunteer, Linda Lyons returned to formal education at Pima Community College and the University of Arizona. While pursuing degrees in English and Creative Writing, she participated in multiple volunteer opportunities including the establishment of a library and learning centre at a Mexican orphanage.  Now fully retired and settled on the shores of Lake Simcoe, she putters about her “work-in-progress” home and garden and indulges her life-long passion of reading and writing. Decades from being a young girl who haunted the bookmobile, hid under the covers with a flashlight, and read cereal boxes and toothpaste tubes, she chooses to view these challenging times as an opportunity to appreciate the fellowship of family and friends and the wonder of books and the natural world.

Lisa Morgan is the Midday host at 107.5 KOOLFM in Barrie. An avid reader, some of her earliest memories involve visiting the library for story time and to borrow books to pass the long summer days.   After winning last year’s inaugural event, Lisa is excited to be hosting Simcoe Reads this year.